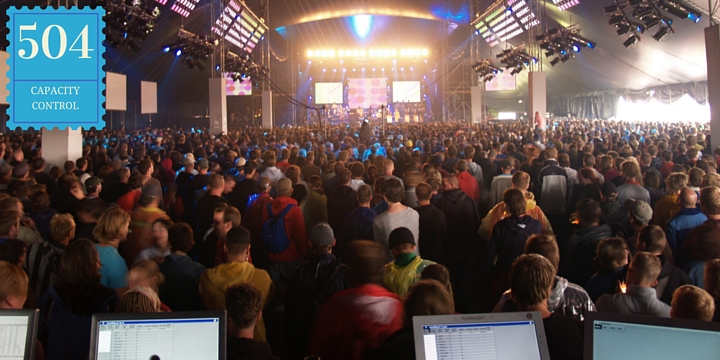 Automated capacity control and security met in a nightclub

In this post we will answer these questions and more, talking about automatic people counters, the importance of correct and precise capacity control and the regulations for leisure venues such as bars, nightclubs, and mega-events such as concerts or festivals.

On the one hand, there are bars, nightclubs and party venues, whose priorities are to offer a great service to their clients, guaranteeing their security and at the same time making the highest possible profit. On the other hand, there are police and other authorities who want to make sure laws are followed. So, we can assure both parties dedicate resources and time to make sure the maximum capacity on these locals is never surpassed, in order to avoid dangerous situations.

Traditionally, this capacity control has been done manually or with turnstiles, as we explained in this previous post, however, the first method is inexact and the latter hinders the entrance and exit of people. Moreover, precision in the people counting system is always important, but in some cases such as big nightclubs with multiple dance floors, it is a priority. And normally, counting roughly the public eyeballing it is very difficult and the result of it being exact is very unlikely.
For this reason, we believe installing automatic people counters would be beneficial both for the police, who always measures the audience eyeballing it, and for leisure venues. Then, authorities would be able to know the exact attendance and venues’ owners would not only have the real-time occupancy but also the visits’ influx by time and day of the week, and information to manage queuing and spaces, schedule staff, evaluate their campaigns, etc.

Next, we looked at laws that regulate how the capacity control has to be done. Here in Spain, legally we do not have an homogeneous situation. For instance, in Catalonia, mechanisms to improve capacity control are being developed. The 6th of July of 2009 the law “11/2009” was approved, which implied the creation of new regulations to regulate how capacity has to be controlled at leisure venues and other premises for recreational activities. The regulation “112/2010” approved later, regulates the different capacity control systems that must be used depending on several variables. For example, venues with a capacity equal or lower than 150 people can control it visually, venues with a capacity between 151 and 500 people need to install video cameras at the entrances and exits and if they hold musical events, they have to install sensors (automatic people counters) like venues with a capacity equal or higher than 501 people.
Another similar case is found in the Valencian Community, where last year was approved the regulation “143/2015“, which also specifies the venues that have to install an automated capacity control, in this case those venues that can have a capacity larger than 2.000 people. Other communities, such as Madrid or the Canary Islands, legally are in a similar situation. However, we see that it is not an unusual practice to not install sensors when law says they should be.

Then, why is the installation of automatic people counters not starting to become a widespread practice among nightclubs and macro-events. Well, nowadays there still is not a specific regulation that details how the capacity control system has to be, and without a clear and specific regulation, its usage will not start to spread. Then, after the characteristics of the system have been approved, companies like Counterest will start certifying their solutions. Moreover, because of the crisis, installing this system can be too costly for some businesses. Nevertheless, it is important to take into account that not only is a security solution, but can also provide additional information about visitors’ behavior, which can be useful to reduce costs in the medium term.

Well, we’re sure everyone has heard about an incident were the cause was the excess of capacity. Although luckily the accidents are not common, it is not unusual the uncertainty of how many people are inside a bar or nightclub. Furthermore, we believe that with an automatic capacity control system and the information the owners and employees could get from it, infractions would be reduced, chaotic situations would be avoided and they could make better decisions. For instance, analyzing what happened at the Carnival Dance of Torelló, mega-event that took place in this Catalan village, last February, we know that the capacity limit was 2.500 people and the access was controlled and entrance only allowed to people with a ticket. However, some people were able to enter without a ticket and the capacity was surpassed. Witnesses share that there was a lot of confusion and then, after some people went out of the venue and the situation was a little bit calmer, more people started entering again.
Beforehand, having they installed sensors, organizers would had been able to regulate the entrance by actually knowing how many people were inside. And a posteriori, assuming the accident would had also taken place, then authorities would have been able to know what really happened.

In conclusion, we foresee that not only venues and businesses, which are obliged to install automated people counting will do it, but also other bars, nightclubs and events that want to optimize capacity control, monitor visitors’ influx and better understand  their clients.

Like
Shopping mall owners: it’s time to get immersed on visitor analytics

We use cookies on our website to give you the most relevant experience by remembering your preferences and repeat visits. By clicking “Accept All”, you consent to the use of ALL the cookies. However, you may visit "Cookie Settings" to provide a controlled consent.
Preferencias de cookiesAceptar todo
Manage consent

This website uses cookies to improve your experience while you navigate through the website. Out of these, the cookies that are categorized as necessary are stored on your browser as they are essential for the working of basic functionalities of the website. We also use third-party cookies that help us analyze and understand how you use this website. These cookies will be stored in your browser only with your consent. You also have the option to opt-out of these cookies. But opting out of some of these cookies may affect your browsing experience.
SAVE & ACCEPT